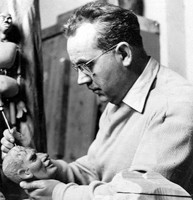 Fontanet studied at the Massana School Design and Art Centre in Barcelona. In 1939 becomes decorator at the Barcelona Spanish Theatre. As a member of The Decorative Arts Promotion (FAD) is in charged to organize shows for children. In 1944 presents the Harry Vernon Tozer’s Puppet Theatre becoming since then director of the string puppet area.
In 1946 Arthur Kaps, director of The Viennese, attended the inaugural function of the Barcelona Puppet’s Theatre (HV Tozer) in the Dome of the Coliseum, and became enthusiastic devising the inclusion of puppets in the variety theatre of The Viennese. From 1948 and throughout many years, Fontanet designed and built numerous string puppets for Herta Frankel.